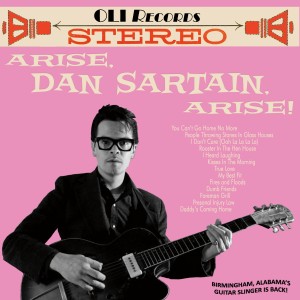 ‘Arise, Dan Sartain, Arise’, the latest studio album by America’s infamous rock ‘n’ roll troubadour Dan Sartain, will be released by One Little Independent Records. Made up of thirteen wickedly wisecracking, vintage surf-rock bangers, this concise and classic record incorporates everything that’s made Dan Sartain the genres favourite underdog over the last two decades.
Seeped in obsidian black humour with tracks like ‘Glasses Houses’, ‘Rooster In The Henhouse’ and ‘I Heard Laughing’ ruthlessly calling out those who would slight him while also riding the hard line of self-awareness, the biting witticism of these tracks pair wonderfully with the playful tone of Sartain’s slick-back dark doo-wop.

Elsewhere on the likes of ‘True Love’ and ‘Fires and Floods’ the crooner gets a chance to flex his punk muscles, pushing the guitars further into distorted territory taking the late 50s garage-rock influence via the late 70s in much the same way The Ramones and The Damned did. But we’re transported right back again when Sartain slows down for ballad standouts such as ‘Kisses In The Morning’ and ‘Personal Injury Law’. Throughout ‘Arise, Dan Sartain, Arise’ searing surf guitars intertwine with beautifully haunted organ jabs, with rhythms pulled straight from saloon bars way out west, and cheeky wink-to-the-camera lyrical whimsy.