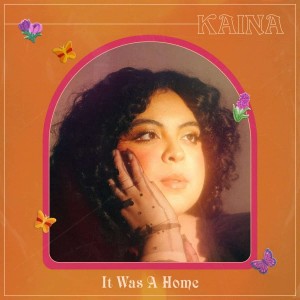 Firmly one of today’s essential artists, Venezuelan/Guatemalan-American singer-songwriter KAINA announces her new album titled ‘It Was A Home’ that is slated for release on March 4th via City Slang. In celebration, the beloved artist shares her smoldering new single, “Anybody Can Be In Love”, along with an enchanting companion video. Directed by Weird Life Films, the visual brings to life KAINA’s whimsical world inspired by the quintessential Mr. Rogers TV series. “Anybody Can Be In Love” embodies the sentiment of authentically accepting love in its various forms. ‘It Was A Home’ will showcase KAINA’s stunning new artistic direction, the result of her own personal evolution and newly found sense of self, while maintaining roots in her signature sound. The album will include features from beloved artists such as Sleater-Kinney, Helado Negro and Sen Morimoto.

Born in Chicago to immigrant parents, KAINA creates generational music that surpasses borders and speaks to a far-reaching community of people that grew up in between languages, cultures, regions, and genres. KAINA has been catapulted to the forefront of a new wave of artists transforming the music landscape through deep representation. Her previous projects, the 2016 EP sweet asl. and her debut 2019 album Next To The Sun, cemented KAINA as a critically acclaimed artist and established her cult following. The projects showcased her signature sound that is lined with a sweet-hearted optimism, devastating authenticity and one that she uses as a means to uplift and build community. She has previously collaborated with Saba, The O’My’s, Sen Morimoto, and through multidisciplinary work around Chicago with various organizations.

“’Anybody Can Be in Love’ is about letting go and accepting love when it comes to any sort of relationship, romantic or platonic. I’ve seen myself and my close friends miss out on a really great moment we’ve wished for or a great relationship because we’re so fixated on getting hurt or being fearful. ‘Anybody Can Be in Love’ is a little reminder to keep it simple and enjoy the moments you’ve been waiting for. Sonically, I wanted the track to sound very psychedelic and dreamy. Almost like love is taking over and you’re just losing yourself in a moment. It was a pleasure working on this with first time collaborator Biako along with Sen Morimoto and longtime bandmate Michael Cantella on bass.” - KAINA ON “ANYBODY CAN BE IN LOVE”