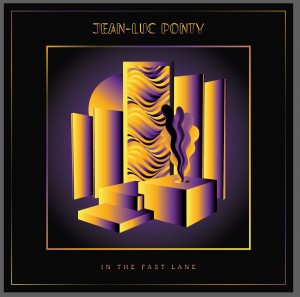 New record on Vive La Musique celebrating legendary French musician Jean-Luc Ponty and his influence on electronic dance music. A prolific composer with over thirty albums to his name which explore a wide spectrum of jazz fused with rock, electronic music and later in his career, West African sounds. A virtuoso multi-instrumentalist, famed for being one of the pioneers of the electric violin, Ponty also experimented with synthesis, composing a number of his albums with the Synclavier - one of the first synths to link up to a computer, offering the opportunity to create and combine multiple sounds.

Originally released in 1989 on the Storytelling album, "In the Fast Lane" is a rich and vibrant composition, with Ponty's rhythmical Synclavier keys and uplifting violin melodies dancing over a driving offbeat groove.

The track lit up dancefloors in the UK jazz-dance movement which started in the late 80's and is one of the all-time classic tunes from the Dingwalls sessions as well as being a firm favourite of an endless list of underground heavyweights including Theo Parrish, Floating Points, Gilles Peterson, Patrick Forge and even The Electrifying Mojo! many others, it, was also championed by influential Detroit radio DJ the Electrifying Mojo - leading the track to be referenced by the first wave of Detroit techno producers. Remasterd by Atjazz and cut loud at 45, you're unlikely to have heard a fatter and fuller version of this track on vinyl!

The release also features a brilliant cover version from Opolopo. He faithfully recreates the original synth lines around a deep and jazzy house groove, producing a modern dancefloor masterpiece which impressed Ponty himself!

The 12" is presented with stunning artwork by Michal Rafaj and liner notes written by Ponty f, telling the story of how the track was composed and recorded as well as exclusive photographs that have never been published before. An absolute triumph and a must-have for jazz-dancers lovers!

Matt says: Phwwwaaaooor those bubbly keyboards! Certain to give even the most wooden dancer a bit of wiggle in the hips, this bonafide jazz-dance classic is made available to all again, this time round with a mega cover version by no other than Opolopo.... form an orderly queue!