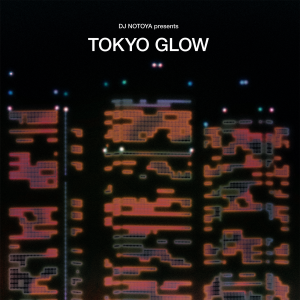 The selection on ‘Tokyo Glow’ starts with 'Kimugare' a relaxed mid-tempo track by Kumi Nakamura, actually a famous actress who only recorded one album in 1980 for Columbia. The set continues and flows effortlessly with the sunshine grooves of Miyuki Maki, Hatsumi Shibata and cult keyboard player Hiroshi Sato before the pace starts going faster and funkier with New Generation Company, Kengo Kurozumi - with his superb boogie, 'Juggler' - and one of the queens of the genre, Hitomi 'Penny' Tohyama with 'Tuxedo Connection'. Another fine example on the set is the mid-tempo groove of "I Wander All Alone Part III" by New Generation Company, an aggregate group of some of the best Japanese session musicians led by arranger Katz Hoshi and including Hiroyuki Namba (key), Kazuo Shiina (gtr) and Yutaka Uehara (ds) who all played with Tatsuro Yamashita among many others.

There are many other excellent examples in 'Tokyo Glow', showcasing the diversity and specificity of Japanese City Pop during the late 70s and 80s.

Nippon Columbia opened their much-guarded vaults to curator DJ Natoya. Tracks were remastered in Tokyo and the result, ‘Tokyo Glow’, is a unique insight into a most creative period in Japanese music.