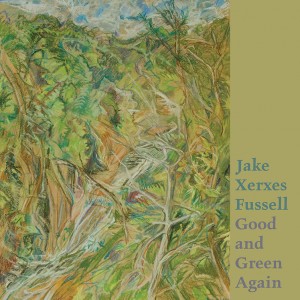 One of the most striking and strangely moving moments on Jake Xerxes Fussell’s gorgeous Good and Green Again an album, his fourth and most recent, replete with such dazzling moments arrives at its very end, with the brief words to the final song “Washington.” “General Washington/Noblest of men/His house, his horse, his cherry tree, and him,” Fussell sings, after a hushed introductory passage in which his trademark percussively fingerpicked Telecaster converses lacily with James Elkington’s parlor piano. That’s the entire lyrical content of the song, which proceeds to float away on orchestral clouds of French horn, trumpet, and strings, until it simply stops, suddenly evaporating, vanishing with no fade or trace, no resolution to its sorrowful minor-key chord progression, just silence and stillness and stark presidential absence. It feels like the end of a film, or the cold departure of a ghost, and is unlike anything else Jake has recorded.

In all his work Jake humanizes his material with his own profound curatorial and interpretive gifts, unmooring stories and melodies from their specific eras and origins and setting them adrift in our own waterways. The robust burr of his voice, which periodically melts and catches at a particularly tender turn of phrase, and the swung rhythmic undertow of exquisite, seemingly effortless guitar-playing here he plays more acoustic than ever before pull new valences of meaning from ostensibly antique songs and subjects.

On Good and Green Again, Jake not only ventures beyond his established mastery of songcatching and songmaking into songwriting, but likewise navigates fresh sonic and compositional landscapes, going green with lusher, more atmospheric and ambitious arrangements. The result is the most conceptually focused, breathtakingly rendered, and enigmatically poignant record of his wondrous catalog. It’s also his most deliberately premeditated album, representing his fruitful return to a producer partnership after two self-produced projects, What in the Natural World (2017) and Out of Sight (2019) (William Tyler produced his friend’s self-titled 2015 debut.) This time James Elkington produced and played a panoply of instruments, bringing to Jake’s arcane song choices his own peerless sense of harmony and orchestration, balance and dramatic tension.

Album opener “Love Farewell” (featuring some beautiful singing by Bonnie “Prince” Billy), an elliptical tale of the folly of war, set to the world’s most heartbreaking goodbye march for a lover left behind. “Carriebelle” and “Breast of Glass” each similarly concerns, in its own way, romantic love and leavings. All three songs highlight Jacobson’s diaphanous, understated brass parts, tying them together in a true lover’s knot. “Rolling Mills Are Burning Down,” with its distant keening strings and capacious sense of space, observes and mourns the loss of work and community in the wake of elemental disaster. Nine-minute tour de force “The Golden Willow Tree,” the sole explicitly narrative song herein, is a hypnotic, minimalist rendering of a tragic maritime ballad about scuttling an enemy ship in exchange for wealth and glory and a captain’s inevitable betrayal.