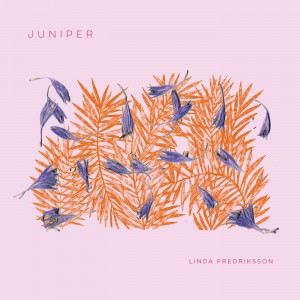 Linda Fredriksson (they/them) shares their debut solo album "Juniper" on We Jazz Records, 29 Oct 2021. Linda (of Mopo and Superposition) has been working on the compositions heard on the album for several years, composing them mostly on guitar, keys and by singing. Only later have they been arranged for the band heard on the album, including Fredriksson on saxes and various instruments, Tuomo Prättälä (of ilmiliekki Quartet) on rhodes, moog and piano, Minna Koivisto on modular synth, moog and OP, Olavi Louhivuori (of Superposition) on drums, and Mikael Saastamoinen (of OK:KO and Superposition) on bass, plus featuring the Swedish artist Matti Bye on piano.

At heart, "Juniper" is a "singer-songwriter album", performed by an instrumental jazz band. The end result is unique, personal, and as Linda themself puts it "quiet and introspective". The first single from the album is "Neon Light [and the sky was trans]", "a song from the shining streets – the beginning of something new", featuring field recordings of rain falling down behind the window of Linda's Helsinki working space.

It's a fitting introduction to an album full on wonders and carefully crafted secrets ready to be discovered. "Juniper" is a world unto itself, and Fredriksson describes the process as one of isolation and of learning slowly to do new things. After the demo stage, the songs were taken to the full band, but what's on the record often stays true to the minimal nature of the early demos. Linda credits their co-producer Minna Koivisto as a key ally in the process of maintaining the demo sessions' fragile beauty on the actual finished record.

With regards to instrumentation, those who have heard Linda Fredriksson in Mopo and Superposition are likely to be surprised by their credit listing including not only alto and baritone saxophones, plus bass clarinet, but also guitar, Rhythmic8 synths, ambience recordings and drum programming. Linda describes the way of finding new sounds through their beloved old guitar as follows: "It's an old acoustic guitar that has been hit by a car and is literally full of holes, but that makes the sound just perfect for this album and you can hear the instrument on 'Pinetree song' and 'Lempilauluni' (Finnish for 'My Loved Song')."

In fact, Linda began their music-making with guitar and vocals, and the debut of the hole-filled vintage acoustic guitar makes perfect sense here, while also describing the album's immediate sound perhaps better than any other individual instrument used. The influence list for the album name checks the likes of Feist, Neil Young, Susanne Sundfør, Alice Coltrane, Pharoah Sanders, Eric Dolphy and Fever Ray, yet the number one inspiration for Fredriksson prior to making the album was "Carrie and Lowell", the 2017 album by Sufjan Stevens. Different as the albums are in terms of instrumentation and general scope, it's fascinating to draw parallels between them by listening to the quietness and immediacy of the music. "Nana – Tepalle" also relates to the world of "Carrie and Lowell" in being a dedication to a lost family member, Linda's grandmother (she is featured in the digital single artwork).

Throughout the album, Linda plays their saxophones in a way that is serving music first and foremost. The musician's ego, so often at the forefront in jazz, takes a backseat, and the songs themselves remain. Linda thinks as a composer, utilising their instrument where and how necessary, not presenting "chops". "It's sometimes hard to play simple," they say, "but I tried to follow my instinct about what the songs need. The mood rules here, any solos or improvisations happen around that at all times."

"Juniper" can still be heard as a jazz album, but perhaps one reminding that the word doesn't need to mean any one thing in particular. At its best, jazz music is highly personal and "of the moment", both true on "Juniper". The album has been made in two different studios, three homes, two summer cottages and four working spaces. It was recorded with professional studio equipment but also with an iPhone and on a basic built-in laptop speaker. With that, "Juniper" stands as a remarkable musical diary of a creative musician and composer during the early 2020's.