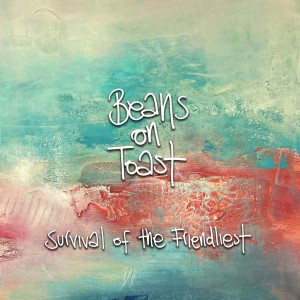 “'Survival of the Friendliest' is an album about hope. An album about why I think human beings are beautiful and brave and why I dare to be optimistic in a world full to the brim of bad news. ”Written in early 2021 when the bad news was everywhere. Out priced from the city Beans called home, he and family left and set up shop on the coast. “In my new world, I switched off social media, looked to nature and zoomed out to write songs about a bigger, longer and stranger story. There are no songs about Brexit, about coronavirus, about climate catastrophe. I’d sung those songs already. I’m not naive to the challenges we face as a species and I’m not ignoring that. But in order to tackle our current predicament, I feel we need to be in a good place mentally and spiritually.

This is an album about finding that peace in preparation for the road ahead. ”The album was recorded around the Summer solstice in the midst of a heatwave, a thunderstorm, a bird song, a glorious sunset and a midnight swim. The music was written with Blaine Harrison and Jack Flanagan of the Mystery Jets at Big Jelly Studios in Ramsgate and produced by Blaine Harrison. The title of the album points to the overarching theme, but as you can imagine things deviate a little, it’s a Beans on Toast record after all. There is of course a Love song, “Let's Get Married Again” was inspired by a flurry of wedding bookings Beans took on in lieu of music festivals during summer 2021. The song “The Commons” was inspired by the Nick Hayes book - The Book of Trespass - and visionary Bristol poet Dizralei joined in to write the song “Apples”, inspired by The Overstory by Richard Powers.

Beans On ToastKnee Deep In Nostalgia