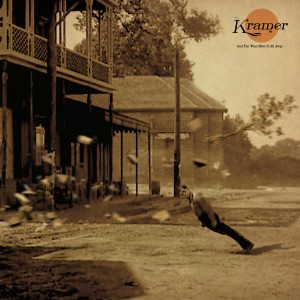 Celebrated as a collaborator, producer and champion for some of the most boundary-pushing artists of the post-punk era, the musical ringleader known as Kramer is emerging from a pandemic-year gestation period with his first solo collection of original songs since 1998. The 10-track And the Wind Blew It All Away is the culmination of Kramer’s 2020 stint as Artist-In-Residence for Indianapolis-based Joyful Noise Recordings. The indie label’s goal was to provide a forum for his original material and support a revival of his groundbreaking but long-dormant Shimmy-Disc label, whose roster has included Daniel Johnston, GWAR, Jad Fair, King Missile, the Boredoms, and Kramer’s bands Bongwater and Shockabilly.

The central product of the residency was a subscription-only, limited-edition, five-LP box set. Although the subscriptions sold out, 75 copies are being released for retail-only sales in a gesture of support for independent record stores. Wind is the fifth installment of the set, which is also available in digital form. Shimmy-Disc and Joyful Noise are partnering on the album’s release as a standalone statement. Like the project’s other sides, Wind was mixed on a vintage tube console from the historic United Western Recorders studio in Hollywood, where the Wrecking Crew played sessions for the Beach Boys’ Pet Sounds and Smile, Love’s Forever Changes and the Mamas & the Papas’ biggest hits, among other activities. Kramer – whose production credits also include Galaxie 500, Will Oldham, White Zombie, Low and Urge Overkill – performed all the instruments and vocals on the record, which features nine new songs and closes with a cover of Leonard Cohen’s “Winter Lady.” The album’s vibe is meditative and atmospheric, Kramer’s vocals ghostly but not unfriendly. Musically, it’s a gentle and magical mystery tour of simmering electric guitars, acoustic string instruments, organs, pianos and mellotrons, tape loops, reversed tracks, found sounds and a bare minimum of percussion. Lyrically, weather metaphors seem to represent personal, emotional entanglements.

In typically cryptic fashion, Kramer described the mood that fueled the writing and recording. “A terrifying wind is coming,” he said. “I recorded this LP as I wondered, through sound and song, if I’ll ever collaborate on making music with another artist by my side again, or live to see another New Year’s Eve, or ever hear my daughter’s voice again, or ever Love again. Time will darken it. It always does. “Do I really want to be the last man standing, in a wind like this one?” Yet, from those dark origins, Kramer has crafted an achingly beautiful and ultimately hopeful song cycle that conveys a full spectrum of emotion while retaining a cohesive and distinctive sound. And the Wind Blew It All Away is a record that can stand its ground.