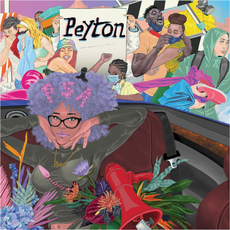 ‘PSA’ is the debut album from Houston R&B artist and singer-songwriter, Peyton.

Producers on the album include Biako, Jay Anthony, Vicky Farewell and Keys & Krates.

Radiating confidence and self-love, ‘PSA’ sees Peyton standing in the spotlight and making herself heard, paying homage to her identity and Texan roots.

Peyton previously collaborated with Steve Lacy of The Internet for the single ‘Verbs’.