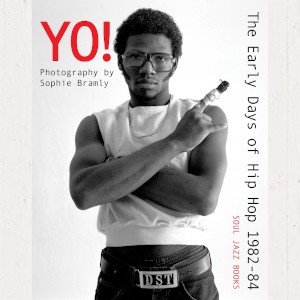 ‘Yo! The Early Days of Hip Hop 1982-84’ is a new book published by Soul Jazz Books/Records that features over 300 pages of stunning photographs documenting the rise of hip hop in the early 1980s, taken by French photographer Sophie Bramly.

In 1982, aged 22, Sophie Bramly moved from France to New York at and became firmly embedded in the emergent scene, taking pictures of everyone from graffiti artists and breakdancers to rappers.

The book features many stunning, intimate images of a star-studded roll call of legendary hip hop figures, all of whom were only just getting known or in their ascendency, including Kool Herc, Afrika Bambaataa, Grandmixer DST, Jazzy Jay, Red Alert, Grandmaster Melle Mel, Kurtis Blow, Lisa Lee, the Fat Boys, Run-DMC, Beastie Boys and many more, alongside legendary graffiti artists such as Keith Haring, Dondi, Futura, Phase One, Zephyr and Lady Pink, and breakdancers including members of Magnificent Force, Dynamic Breakers and the Rock Steady Crew.

Sophie Bramly returned to France in 1984, bringing a number of US hip hop artists to Europe, moving to London in 1987 to host and produce MTV’s first ever hip hop show, Yo! MTV Raps. She currently lives in Paris and her work is featured extensively at Hip-Hop 360, a six-month long exhibition showing at the prestigious Philarmonie de Paris, France (December 2021 - August 2022).