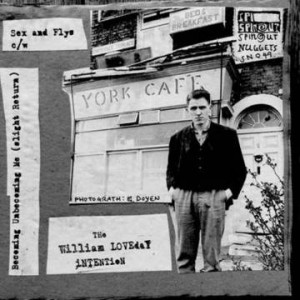 Wild Billy Childish has been recording and performing since the 1977 punk explosion. The Pop Rivets, Thee Milkshakes, The Headcoats and The Buff Medways are just a few musical outfits that Billy has been involved with. Billy is also an internationally exhibited artist and poet. The William Loveday Intention is the latest incarnation. The groups name can be attributed to Billy's grandmother, Ivy Loveday, who registered his birth as William Ivy Loveday, with William being his great grandfather's name. The 'intention' of The William Loveday group was to revisit some early tunes which Billy had imagined could be orchestrated. This was the beginning of a 'career in a year' with over 14 LPs being recorded during the lockdown period at Jim Riley's Ranscombe Studios.


Side A's 'Sex And Flys' is a complete make-over of the original Rhythm 'n' Punk track previously recorded by Thee Headcoats (which can be found on the 1996 long player 'In Tweed We Trust'). Side B's 'Becoming Unbecoming Me (Slight Return)' recounts the true-life story of a Jewish girls change of identity in war-time Venice to escape the death camps.