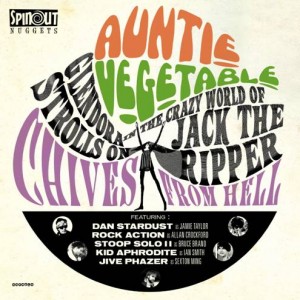 Auntie Vegetable were one of Medway's best supergroups, with members/ex- members of The Prisoners, Ye Ascoyne d'Ascoynes, The Milkshakes, The Gruffmen, The Dentists and some others, the world was their plate and they was ready for the goodness to spurt.

With Jamie Taylor (Dan Stardust), Ian Smith (Kid Aphrodite), Allan Crockford (Rock Action), Bruce Brand (Stoop Solo ||) and Sexton Ming (Jive Phazer) gathering together to form an 'Acid Garage' group, their task was to destroy everything they could, but with much failure, they fully entertained a pub full of listeners way back in 1986, doing the same in other outlets after, including the legendary performance at The Bandstand, Chatham in 1986 (footage of which can be found on YouTube). With no particular 'break-up', the Auntie Vegetable parts went on to much success in formations such as The Headcoats/Thee Headcoatees, Phaze, The Prime Movers, The Solarflares, and each are still active in many formations, notably The Galileo 7, The Dirty Contacts, The James Taylor Quartet, The Masonics, The Mindreaders, Armitage Shanks, The Voo-Dooms, Sounds Incarcerated, Sexton Ming and many more!

Some 35 years later, 2021 sees the Auntie Vegetable re-grouping for a one-off show in Medway, with this EP allowing us to remember the goodness that the edible plant matter provides. Here we have four of the five recorded covers from the 1986 Woolly Studios recording, the fifth to feature elsewhere. These tracks have previously been featured on the Medway Powerhouse albums, and Hangman Sampler from Hangman Records between '87-88, now with added mastering to fill your needed appetite. Side A's glorious take on Ray Stanley's 'Glendora' (in Downliners Sect take) sets the pace, with The Yardbirds' 'Stroll On' following up. Side B burns into action with the Crazy World Of Arthur Brown's 'Fire', with a finale of Screaming Lord Sutch's 'Jack The Ripper'.