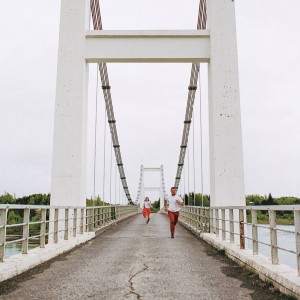 Ferris & Sylvester release their debut album ‘Superhuman’, a body of work highlighting the very best of the duo’s timeless songwriting. The twelve track album holds ten never before heard songs and takes the listener on a journey through the duo’s world where genres intertwine and emotions are stripped down to the core.

The album was recorded at Bear Creek Studios, Seattle USA with Grammy nominated producer Ryan Hadlock (The Lumineers, Brandi Carlile, The Strokes) and at Sawmills Studio, Cornwall UK with producer Michael Rendall (Pink Floyd, The Jesus and Mary Chain, Youth). Combining influences from Folk, Blues and Americana music from both sides of the Atlantic, the duo’s debut sits in a new and distinct territory.

A note from the duo: ‘This record is a story that unravels all that we have come to know and understand about being human. The messy parts which we all share and experience, though often we keep them safe behind our armour. Heartache, rage, hunger, jealousy, disillusion, confusion, loneliness. Also, the wonderful parts, the things that shape us. Self-knowledge, friendship, love, understanding, sacrifice. These are what make us human and this is what has shaped our record. We kept these songs close to us in the hope that when we released our first album, we could share the experience with the people who have honoured and supported our music from the beginning. In the flesh. It is as much yours as it is ours. Our hope is this: you will feel connected, inspired maybe even empowered by our writing and will go forward with a new sense of courage and self-belief.’

Since meeting as solo musicians a few years ago at the London Blues joint Spiritual Bar, F&S have released a collection of singles and EPs, a lot of which they recorded in their South London flat. Their raw and honest songwriting about their life together brought praise across BBC Radio 1, 2, 4 and 6, earned them a place in Rolling Stone’s ‘Top 10 Americana Acts You Need To Know’ and saw them climb to number 14 on Spotify’s UK Viral chart. Their EPs ‘Made In Streatham’ and ‘I Should Be On A Train’ have racked up over 10 million streams on Spotify and their singles have been synced across British TV, most notably for BBC’s coverage of Wimbledon.

During their relatively short pre-Covid existence, their music took them around the world, playing over a hundred shows every year including Isle of Wight, Sziget, Americanafest and BST in Hyde Park. They have shared the stage with the likes of Robert Plant, George Ezra, Jade Bird and James Morrison, winning over audiences and building a loyal and mighty fanbase. The pair sold out two nights at London Omeara on their last tour and are in the middle of a run of UK dates ending at London’s Lafayette on 21st November, promoted by Live Nation and Kilimanjaro. They’ve been championed by BBC Introducing and have played their stage at SXSW, Wilderness and Glastonbury as well as their very own live session at Maida Vale Studios. Last year, they won the Emerging Artist Award at The UK Americana Awards, earned a spot on BBC Introducing’s ‘Best of 2020 list’ and signed their first publishing deal with Sentric Music.