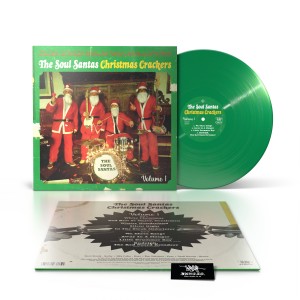 In 2014 The Soul Santas first, and only gig at a Christmas School Fair was a roaring success, after which they decided it couldn’t be bettered so didn’t try. Until, that is, some rehearsal recordings were found on a phone.

These recordings inspired Christmas Crackers Vol.1, recorded over 2 days in October 2020 at Invada Studios The album was released last winter digitally & is now available on vinyl for the first time!

Pressed on green or red vinyl (500 copies of each colour). The colour isn't marked on the packaging so the colour received will be a lucky dip.

Barry says: Who are the Soul Santas? Well, it's something to do with a christmas school fair... or it could be BEAK plus Barrow's partner in soundtracking, Ben Salisbury. Who knows.. Al I can say is it's as an essential a christmas LP as Low's, and it's decidedly more funky. What's not to love?