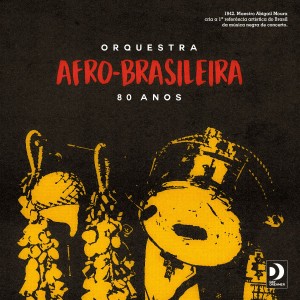 Led by maverick composer Abigail Moura, Orquestra Afro-Brasileira were one of the most influential yet overlooked groups in Brazilian music history. Operating for almost thirty years until 1970, they released just two albums - the first of which, Obaluayê, has recently been reissued by Day Dreamer Records - and left behind a legacy of Afro-Brazilian consciousness that continues to resonate today.

Combining Yoruba spirituality, folk tales, Candomblé chants and West African percussion with the instrumentation of the big band jazz tradition in the United States, the Orquestra placed Afro-Brazilian heritage in a new and vital context. Weaving emancipatory narratives into complex poly-rhythms and powerful, syncopated horn lines, the group educated and enlightened all those who saw them perform.

For Abigail’s protégé and percussionist on the group’s 1968 album Carlos Negreiros, the message of the group’s music had a profound impact: “I became aware of what it is to be black,” he says, “discovering the extraordinary potential of the Afro-Brazilian culture in the making of the national ethos.”

Now the last remaining member of the original Orquestra, Carlos was tracked down by producer Mario Caldato Jr. - whose credits include Beastie Boys, Marcelo D2 and Seu Jorge among others - to oversee the first new album of Orquestra Afro-Brasileira material since 1968.