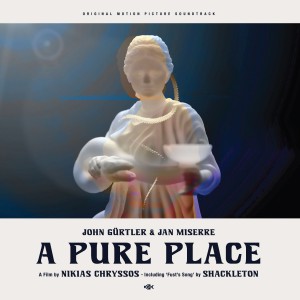 The script for A Pure Place had a dizzying effect on John Gürtler & Jan Miserre; their minds reeling with the possibilities.

From Persian sheep bells, Chinese sheng, prepared trombone, quarter-tone piano, a beaten-up cembalo, hand percussion, and a room full of synthesizers, embryonic compositions and experiments came to life early on in the project.

An electro-acoustic extravaganza, the soundtrack for A Pure Place takes a deep bow towards the many magnificent composers and scores from the late 60s and 70s where orchestral arrangements met with tape loops, psychedelia, and instruments from across the globe. Listening to that era of film music, anything seems possible.

The minimalist tones of ‘Ritual Bells’ set the dial to weird in the opening sequence of the movie, whilst ‘The Island’ makes use of ambient vocals recorded through an oil drum, gently introducing one of the score’s main themes with a distant quarter-tone cembalo.

Acclaimed British artist Shackleton’s eerie original version of ‘Fust’s Song’ (also included) was a tonal keystone for the entire soundtrack. Gürtler and Miserre translated his psychedelic electronic blueprint, layering acoustic instruments and bottom-heavy percussion in their ‘Paradox Paradise’ production style. The vocals, written by Chryssos, and sung by the cast on set, capture the sonics of the actual crypt-like space where cult leader Fust addresses with his following.

‘A Glimpse of the Other Side’ speaks of love and death in a 70s-indebted composition reflecting John and Jan’s shared love for melancholic and suspenseful chord progressions. Meanwhile, the sparkling synths of ‘Athens’ - the children discovering neon-lit civilisation after years confined on the island - transplant us to an entirely different era.

Greek artist Maroulita del Kol features heavily throughout - her choir of vocals on ‘Erotica’ were recorded late at night in the studio foyer, capturing its unique tiled reflections and concrete reverb.

On ‘Purification’ Maroulita’s voice guides us alongside a Moog bass drone, building to an ecstatic climax, whilst she also features in the film’s disco-centric ending credits on ‘Gatoula Mou Mikri’.

A1. Ritual Bells
A2 .The Island
A3. Fust’s Song
A4 Erotica
A5. Purification
A6. A Glimpse Of The Other Side
B1. Fust’s Song (Shackleton’s Orignal Version)
B2. Athens
B3. Small Doses
B4. Holy Soap
B5. Irinia Takes Over
B6. Gatoula Mou Mikri (feat. Maroulita Del Kol)