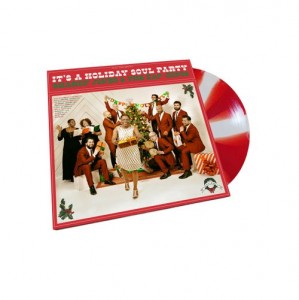 Sharon Jones & The Dap-Kings are here to help music fans get into the holiday spirit. The band will provide a soulful soundtrack to the holidays this year with new album It’s A Holiday Soul Party, out October 30 on Daptone Records.

Kicking off with “8 Days (Of Hanukkah)” – the band’s ode to The Festival of Lights – the 11-song set of original and classic holiday songs is the group’s first holiday record and follows their Grammy-nominated 2014 album Give The People What They Want.

There is no other band around today that plays with the rhythm, feeling, or explosive power of the Dap-Kings. Since releasing their first album in 2002, the band has performed all over the world, had tremendous success on TV and Sharon has collaborated with some of music’s biggest names including David Byrne and Michael Bublé.

In addition to the new album, the Toronto International Film Festival just announced that documentary “Miss Sharon Jones” is set to premiere at the esteemed festival on Friday, September 11. Directed by Academy Award Winner Barbara Kopple, the film follows the dynamic frontwoman through her 2013 battle with cancer, and her triumphant return to the stage around the release of Give The People What They Want.

Sharon Jones & The Dap-KingsGive The People What They Want