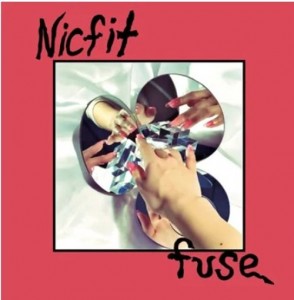 Nicfit are a four-piece punk band from Nagoya, Japan. Comprising Hiromi on vocals, Charley on guitar, KenKen on bass and Kuwayama on drums the group are by turns melodic and menacing. Nicfit are a nervous itch, incessant and impossible to predict. They flip between head-down tumbles of hardcore bounce and freaked feedback clamber with glee, sounding as casual as a slap in the face.

Formed in 2009 after Charley relocated from San Diego to explore the Japanese punk underbelly, Nicfit bonded through a mutual appreciation of Essential Logic, Magazine, Black Flag and Wire. They quickly recorded a demo and started opening for groups like DMBQ, Thee Oh Sees, Total Control and Wimps. To date the band have released a debut 7” EP, a split cassette with Pinprick Punishment and most recently shared a 7” with their comrades M.A.Z.E. too. Now they’ve gathered a spiky new batch of hyperactive songs together into their enthralling debut LP entitled ‘Fuse’, which Upset The Rhythm will release this December.

‘Fuse’ is a flexing treat of a debut album, packed with browbeaten stomp, taut breakouts, guitars that sound more akin to warning sirens and an astute railing vocal delivery. ‘Fuse’ was recorded, mixed and mastered at the Geru Studio in Toyota City with the help of Shigeru Matsui at the board. These ten original blasts of song, and one cover of the Urinals (‘Ack, ack, ack’) are as pummelsome as they are keen to race against the clock. Total life-affirming trample, with pointed metallic moments and glammy undercurrents that forever soar out of the sprawl.