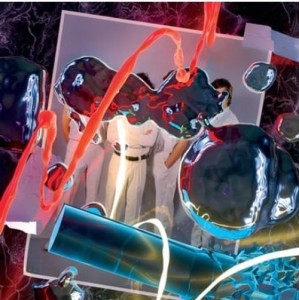 The Zephyr Bones’ psychedelic rock expands in a precise and determined sophomore album. A warm and accessible record that speaks about love, self-affirmation, loss and hope.

A quicksilver track that glides on a buoyant bassline and glistening melodic interplay, “No One” is the sound of joy. While it’s easy to pigeonhole it as a dreampop track, there’s undoubtedly hints of psych, funk and Kraut all nestled in there, The Zephyr Bones blurring the lines with ease in this intoxicating track that shows growth in their sonic heft without losing their feathery lightness.
Beats per Minute

"No One" opens up like a traditional indie dance track, with sparkling guitars and a vibrant synth lead reminiscent of a cut from The Strokes or Tame Impala. But it progresses in a fascinating way, bringing in a crunchy psychedelic guitar solo and a funky instrumental breakdown at the end. This track has a variety of sounds, but it's prog rock more than anything, as the dynamic instrumentation sticks out the most. Every layer here is not only an excellent piece to the larger puzzle while also being technically impressive on its own. Despite these nods to the more experienced rock nerd, what's the most fascinating is how accessible the tune really is. The wild drum beats, dense synth layers, and lightning-quick guitars demonstrate the true cerebral chemistry of the group. The sheer musical talent doesn't hurt either.
Earmilk

When The Zephyr Bones first burst into the scene they crushed everything that got in their way. Their music slapped us like a wave when it reaches shore. It took us by surprise and left us asking yearning for more. They coined their style “beach wave”. All this became a first album titled Secret Place, something like the sonic coordinates of a sunny place with a soundtrack of guitars with reverb and intoxicating melodies. You can’t tell whether you’ve been there or not, but you definitely want to go back.
In Neon Body they are the same people, but it hits differently. Their melodies and suggestive guitar riffs are on point. They are able to take you back to places. You will never finish these 10 tracks in the same place where you were when you first hit play. Speaking of The Zephyr Bones is speaking of pure freedom. And yet, in this second album we get to know them in a different way, more determined and with a renewed intensity. The landscape has also changed and now the tone reminds us of the twilight, and in some songs you can even feel the reflection of neon light on your skin.

But let’s not lose the point. What matters here are the songs, and in this album you can find pretty damn good ones. “No One”, the first single, is an excellent entry into the universe created in Neon Body. Addictive and irresistible, it will instantly get you dancing and singing along. “So High” is a dizzying and fast-paced first track. By the time “Verneda Lights” arrives, you have fully surrendered to Brian Silva (vocals, guitar and synthesizers), Jossip Tkalcic (guitar and vocals), Marc López (drums) and Carlos Ramos (bass). “Sparks” shines with its own light: it is a controlled fire until the final part of the song makes everything burn again. “Plastic Freedom” goes all-in with an infallible riff. “Velvet” is as elegant as its title suggests, and “Rocksteady” hits the bullseye again with a chorus that hits like a poisonous dart. “Neon Eyes’’ lifts you up with heavenly back up vocals and “Afterglow” keeps you with your feet on the ground – Why? Because begs you to dance. And then comes “Celeste V”, a song that speaks about loss that puts an end to the recording.