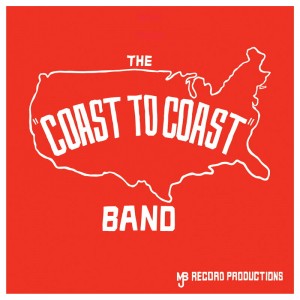 Our second LP this month is an unreleased magical modern soul LP from the band Coast To Coast, the full story below by band leader Mark Beiner...

I met Ben iverson in 1976 when I was 17 years old. I was a junior at Newtown High School in Elmhurst, Queens. At that time, I took a part time job as a Produce Clerk at Walbaum's Supermarket on Northern Boulevard in Jackson Heights, Queens, where I met Ben Iverson who was the "Frozen Food Manager." In between the music, this job was steady income, and he and his Wife, Diane, started a family and raised two Daughters, Tonia and Cytherea, whom I am still in contact with today.

Back then, I remember going to work early just to talk to him about his musical background and his time spent in the 50's and 60's with the Ohio Doo Wop Group, "The Hornets", or better known as, "Ben Iverson and The Hornets." However, Ben was somewhat quiet and at a loss for words when I questioned him with regard to "Ben Iverson and the Nue Dey Express", as well as his short career as Manager and Songwriter for Brooklyn's own, "Crown Heights Affair" in the early 70's.

Between the 50's and 60's, "Ben Iverson and The Hornets" shared billing at music events with recording artists such as, The Drifter's, Bill Haley and The Comets, Pat Boone, Etta James, Mary Wells, Nancy Wilson, Jackie Wilson, Sam Cooke, Aretha Franklin, Lloyd Price and Al Green. Many of these names got their start in the 50's, which Ben met at music concert events hosted by Radio Disc Jockey, Alan Freed. Alan was truly the first Concert Promoter for Doo Wop, Rhythm & Blues, and early Rock & Roll.

In 1978 after Ben and I discussed getting together and composing music, I started writing poetry and expressing in writing my break up with my college girl friend, Paula Vasta. Paula's middle name was Marie, so in kidding around, I would call her "Paula Marie." Ben thought my lyrics were "powerful" and wanted to put them in music. Thus our first recorded 45 rpm record called "Paula Marie", backed with "I Want You Dear." This launched our musical partnership and within a year, the Coast to Coast Band was formed. Ben and I went on to writing two albums worth of material, which in turn gave us a lot of time and presence on stage at our live gigs.

The regular Coast to Coast Band members consisted of Ben Iverson on Lead Vocals, Rhythm Guitarist and Co-Executive Producer, Joe Crowley, who is known today as "New York Congressman Joe Crowley." Carl (Woody Wood) Morton on Bass Guitar, Jimmy Johnson on Keyboards. Woody and Jimmy used to hang and play rap in its early days with "Run DMC" in St. Albans, Queens. Lead Guitarist, Lou Jimenez, currently owns his own recording studio, Music Labs in Elmont, Long Island. On Drums, Eddie Byam, on Alto Sax, Jay Cohen, who in the 70's used to record for "Gary U.S. Bonds." Gary Pevols on Trumpet. On Bone, Scott Burrows, Trumpet player, Steve Becker, whom we lost to Testicular Cancer at the age of 25, along side Neil Levine, Stan Stockley, Tom Russo and additional members that came and went that we used for live gigs and studio recordings.

In addition, special recognition goes out to our Producer, Recording Engineer and Multi-sound Recording Studio, Owner, Dave Weiner and staff. Dave and I launched Multi-Sound Records under the Multi-Sound label in 1980.

Last, of course myself, Mark Beiner, where I served as Executive Producer, Songwriter, Business/Marketing Manager, and background vocals.

Unfortunately, Ben Iverson passed away on March 21, 2008, and cannot be here to share this with us, but his music and voice still lives on!