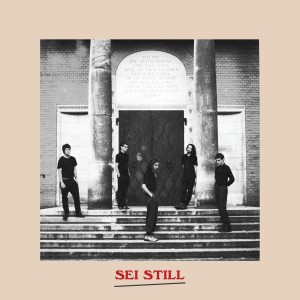 Mexican five-piece Sei Still will return with their second album ‘El Refugio’ on November 26th via London’s Fuzz Club Records. The follow-up to their 2020 self-titled debut album marks a number of changes for the band. Not only have they upped sticks and moved from Mexico City to Berlin, but their sound has undergone a process of evolution too. Where the debut LP was an exercise in mesmerising Krautrock channeling the likes of Neu! and Can, ‘El Refugio’ keeps hold of that motorik pulse but trades the debut’s more expansive and hypnotic tendencies for a collection of dark, wiry post-punk vignettes. The album is a more skeletal effort than its predecessor but packs a greater punch precisely because of that; the songs are shorter and unapologetically to-the-point, brimming with a tension and anguish that makes ‘El Refugio’ a deeply affecting listen.

“The biggest influence on this record was the fact that our personal lives had a radical change and we felt the need to do something different, to dig deeper into the possibilities of what the band was about. We never wanted to make the same record twice. The songs allude to childhood, dreams, desire, loneliness, paranoia and hope. A longing for a different reality that breaks the monotony of daily life." ‘El Refugio’ is still driven by the taut, propulsive rhythm sections of their earlier work – see the driving motorik post-punk of ‘Extrarradio’, ‘Me Persigue’ and ‘Exilio’, or the death disco grooves of ‘Solsticio’ – but the surrounding instrumentation owes far more to 70s punk and new wave than any kosmische travellers. Whilst melodic bass lines propel the music in a perpetual forward motion, guitars flicker from angular and razor-sharp to shimmering and forlorn, peppered by the ambient whirr of synths that oscillate subtly in the background throughout. All the while Lucas Martín’s monotonous sprechgesang vocal (delivered in Spanish throughout) give the tracks a foreboding and ghostly allure. The band still have their hypnotic moments, mind. On slow-burning moments like ‘Soldados Caidos’ and ‘El Peso De La Piel’ Sei Still trade in a desolate, mournful goth-rock and the ethereal title-track ‘El Refugio’ is a shoegaze-indebted comedown that brings the album to a hauntingly beautiful close.