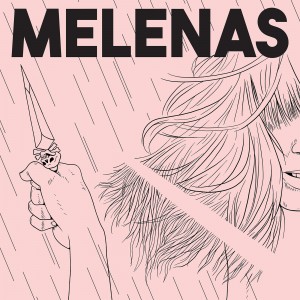 Pamplona, Spain’s Melenas 2017 debut album came like a shot in the dark! A breath of fresh air upon its release in Spain, the album went on to sell through two pressings, with copies barely making outside of Europe (much less their home country of Spain). Trouble In Mind is honored to be reissuing Melenas’ eponymous debut album for a fresh new audience wowed by the group’s 2020 sophomore effort “Dias Raros”. Kicking off with the buzzing bassline of “Cartel de neón”, Melenas debut aims straight for the indie rock pleasure centers; guitars jangle, synths buzz & drums pound, hitting the listener like a ray of sunshine piercing the clouds.

The quartet has a knack for catchy tunes that straddle the line between joyous rapture and poignant melancholy without ever seeming rote or cliché, be it either in a rousing chorus or a hummable melody (see the melancholic “Gira” or the yearning “Una tras otra”). Tunes like “Tú me haces lo mismo” or the boisterous “Sales” inject a shot of adrenalin into their pop narcotics, it’s garagey organ soaking the song in sound, while others like side two’s “¿Dónde estás?” skip along like a lost Go-Betweens track & closing tune “Una voz” rolls in like the triumphant closing credits to a lost indie film, showcasing the group’s transcendant vocal harmonies. Melenas’ debut album showcases a band fully-formed from note one; united in vision & execution, “Melenas” is a stirring and vital debut from a group just getting started.