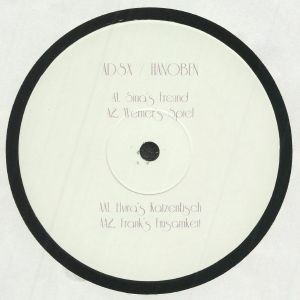 Audiosex and Hanoben stepped out together on Discos Capablanca back in 2018 with the on-point acidities of Phone Sex, and now they're teaming up once again for this killer clutch of edit tackle for the always interesting Duca Bianco label. Rather than the well-mined stocks of disco and funk that usually get dusted down by edit scavenegers, these two have turned to synth pop and German new wave sounds, coming up with four deep cover, deliciously dishevelled pieces which align perfectly with the brand of acidic club music they make themselves. 'Elvira's Katzenfisch' is a prime case in point - a broad, sweeping slice of synthwave which sounds like it might slide off the reel to reel at any moment, while 'Frank's Einsamkeit' swells into a searing 303 burner for the darkest dungeon dancefloors.

A1. Sina's Freund
A2. Werner's Spiel
B1. Elvira's Katzenfisch
B2. Frank's Einsamkeit