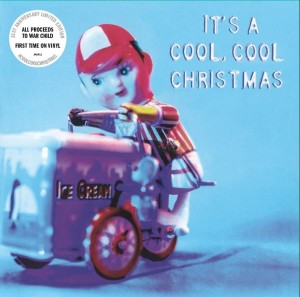 In celebration of the 21st Anniversary of this popular Christmas double album, Jeepster and War Child are releasing It’s A Cool Cool Christmas on vinyl for the first time.

Originally released on November 20th 2000 as a CD only release, it will now be available on vinyl on November 19th 2021.

This double album is released with colourful inners within a wide spine sleeve. This collection of songs is the definitive indie Christmas album and includes contributions from a broad spectrum of indie giants, with songs ranging from traditional standards to originals written specially for this collection. This compilation contains both ballads and songs to pogo around the Christmas tree to in equal measure and coincidentally is a compilation of twenty-one songs re-released after twenty-one years.

The highlights are Low’s much-loved ‘Just Like Christmas’, The Flaming Lips and their ‘White Christmas (demo for Tom Waits)’, the Grandaddy track which is both wistful and amusing and Eels’ ‘Everything’s Gonna Be Cool This Christmas’. In fact there is not a second-rate filler on this album and there’s even a track from Lauren Laverne recorded before she became a famous DJ. The original intention of creating this album was to raise money for a worthy charity. War Child is an amazing organisation that protects, educates and helps children get over the terrible traumas they’ve suffered from war. The work done in their programmes has alife-saving impact on children and their families in some of the most dangerous places on earth.