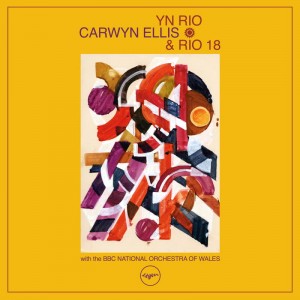 Carwyn Ellis from Cardiff/Wales is a singer, songwriter, composer, arranger, multi-instrumentalist and record producer. He fronts Colorama, formed the Welsh folk group Bendith and hosts a regular themed radio show on Soho Radio. In 2019, Ellis embarked on the first project under his own name, Carwyn Ellis & Rio 18. Sung in Welsh and recorded mainly in Rio de Janeiro, the album, "Joia!" was nominated for the Welsh Music Prize and followed by "Mas" in early 2020. The new album "Yn Rio" is a collection of new songs recorded in Cardiff together with The BBC National Orchestra Of Wales.

In 2017 Carwyn Ellis joined the touring line-up of The Pretenders. For Ellis, a record collector and fan of Brazilian music, the opportunity to tour South America would present opportunities he couldn't have possibly imagined when he accepted Chrissie Hynde's invitation. "The first place we went to was Rio and by the time I met Chrissie for breakfast the day after our gig, I already had a bag of albums I'd just bought. I'm sitting with her and she says, 'You should meet my mates, and do something in Welsh with them! Nobody's done a Welsh language album with Brazilian musicians?"

In 2018, when Alexandre Kassin, a leading light in that Brazilian scene announced a show in London, Hynde suggested that they see it. "I met him afterwards," Ellis recalls, "and we hit it off straight away." Within weeks, Ellis was on a plane to Rio with songs that would form the basis of the first album. This creative purple patch extended into another album released early in 2021 with Carwyn working once again with Kassin plus long-time friend Shawn Lee. The songs on "Mas" drew on the environmental threats that face both Wales and South America, spidering out around the central theme of water ("rains, no rain, droughts, rising seas and flooded valleys for corporate gain. We're screwed without it and screwed if there's too much").

With "Mas" recorded but weeks away from release, Ellis received a call from Gareth Iwan Jones, head producer of BBC Radio Cymru, offering a third album to be performed in March 2021. Ellis started to reflect upon the life-changing events triggered by his South American adventures. The Welsh word 'hiraeth' which describes the longing that Welsh people feel when they're far from home, was something that he was now beginning to feel for Rio de Janeiro: "'Yn Rio' is based around a day in Rio," he explains. "The events of 2020 influenced the record in as much as I wanted it to be a complete antidote to what was going on. If you couldn't go on holiday in real life, you could at least put this record on."

The first single "Olá!", incorporating Jorge Ben's spirit in the chorus and rhythmic breakdown, manages to sound languorous and euphoric. "Cariad, Cariad" was a Portuguese folk poem brought to Ellis' attention by Sonya from Quarteto em Cy and arranged by Christiaan Oyens. "Tristwch 20" is a nod to "Foot and Mouth 68" by Gorkys Zygotic Mynci from "The Blue Trees", 'one of the most beautiful albums of all time', while "Ynys Aur" is named after a 1929 book by Welsh missionary J. Luther Thomas written on returning from his travels to Papua New Guinea. With Kassin unable to participate, Ellis thanks him by translating his "A Paisagem Morta" to create "Y Bywyd Llonyd". For Carwyn Ellis "Yn Rio" is an extraordinary memorial to extraordinary times."There are some days so idyllic you just want tobe able to jump back into them at the touch of a button. That's what I was searching for when I was writing these songs."