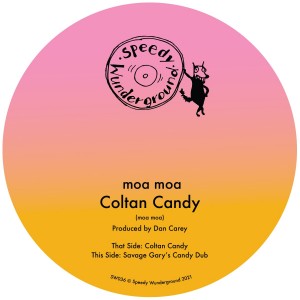 With COVID restrictions now easing, and fresh off the back of their ongoing in-lockdown Quarantine Series, as well as EP + album releases from Calder Valley upstarts The Lounge Society and cult singer-songwriter Stephen Fretwell respectively –the studio is now re-open and Speedy are back to doing what they do best: releasing one-off 7”/digital singles.

Having sent the label a collection of demos during lockdown – of mainly finished songs – the one which caught Carey’s ear was actually a20-second snippet of just an idea really – which the band had included in what they had sent over. ‘I know it sounds mad’ says the producer – ‘but I just knew there was something in it.’ Meaning in true Speedy style the band and producer alongside engineer Alexis Smith had to build the song around the single motif from scratch on the day – having previously never met before,in what turned out to be a mammoth 13-hour recording session.

‘It was scary and exciting in equal measures going into it’ says the band, ‘but Dan and Lex create such a safe, encouraging creative space, and from that, we somehow came out with a moa track we're all happy with.’

The resulting track ‘Coltan Candy’ is 4 + minutes of hook-laden sunshine alt-pop that layers and builds,perfectly reinforcing the band’s manifesto of marrying ‘unconventional songwritingwith pop-leaning sensibilities’, channelling (amongst others) Unknown Moral Orchestra, XTC and MGMT with contemporary R & B influences into something seamless and new. And it’s catchy as hell.

‘Lyrically, the tune is darker and more direct than our other stuff’ says James (Ratcliffe), ‘even if it’s offset by everything else going on in the music. The mainhook of the song is the lyric "Coltan Candy" which refers to a mineral that has been mined unethically for decades in Africa for the production of electronic circuits in the West. I’m making some pretty OTT comments about corruption, technology, and the failures of institutions in the West, but also asking some questions about our own involvement and inability to do anything about it.’

Regardless of the seriousness of the content the band just feel relieved to have finished the track. ‘Even up to the night before the session we had 20 seconds of music that we were jamming into what sounded like an awful country track…so, it’s fair to say that the whole process really helped us to focus and make decisions!’