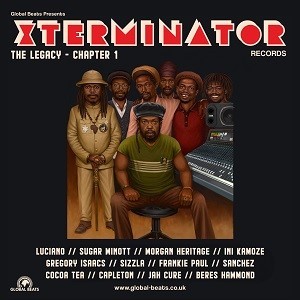 In over thirty years of regularly meeting with reggae artists and musicians in the UK and Kingston, I never encountered anything like the feeling of being around the Xterminator camp during the nineties. It wasn’t just the depth of talent that owner Philip “Fatis” Burrell could call upon or even the quality of his productions, but the sense of purpose he instilled in people. At times, it felt as if he and his group of largely Rasta artists had aligned themselves with a higher power - not just in their reasoning sessions, but when someone stepped to the mic and opened their heart, as well as their mouth. If you recorded for Fatis, you went into the studio empty-handed - no lyrics - and put your trust in the Almighty. That was the rule and the artists who passed through Xterminator had to really feel what they were singing or deejaying about.

As you can tell, the music on this album wasn’t just slapped down in search of hits or a quick buck. The aim was more profound than that, and nor was it made by people who watched the clock or sought stardom, but souls brave enough to stand up and speak their truth as music filled the room and Fatis smiled from the side-lines. The irony is that whilst they’re hailed as classics today, Xterminator records were hardly played on the radio in Jamaica - mainly because payola was rife when these tracks were recorded, and the idea of a DJ playing music for reasons other than love or solidarity was never going to impress Fatis, whose earliest

production here dates from 1990. Four years after recording Hot Stepper, Ini Kamoze had the biggest hit of his career with a revamped Here Comes The Hotstepper but the original version, stripped of bombast and samples, makes the same point just as well. “Hot stepper” is Jamaican slang for a badman, which is how Gregory Isaacs uses it in the lyrics of Make Me Prosper. That song is another of the Cool Ruler’s ghetto confessionals, whereas Ini’s advice - reggae warriors please take note - is to “stand strong, don’t fear no one. Live good with everyone.”

Sugar Minott was one of the first artists to voice for Fatis and Run Tings isn’t a boast, but a warning to our so-called betters. Listening to it in 1992, it was easy to believe that the tide was turning. Soon afterwards, Fatis - who was born in Birmingham, UK, but raised in Kingston - dropped the “E” from Exterminator and hired Dean Fraser as the label’s musical director. With Dean overseeing the vocals and harmonies the quality of recordings improved markedly, aided by Sly Dunbar’s sledgehammer snare drum, backing band the Firehouse Crew’s growing maturity and a new generation of Jamaican roots reggae artists led by Luciano and Sizzla.

Together with established stars such as Cocoa Tea, Beres Hammond, Frankie Paul and Sanchez, they did some of their best-ever work for Fatis. Sanchez had begun his musical journey by singing in church and Praise Him is a masterpiece of gospel reggae that still prompts a forest of raised arms in a dance to this day, but then you could say the same thing about the majority of tracks here. Fatis had voiced Sanchez from early and then discovered Capleton, who was a dancehall artist before embracing Rastafari. By the time he recorded Stand Tall, the St. Mary born deejay was called “The Prophet” and releasing one Rasta anthem after another. Jah Cure, then still a teenager, voiced Trod In The Valley that same year, shortly before beginning a lengthy jail sentence. He was a protégé of Beres Hammond’s, who was a very close friend of Fatis’. The distinctions between Beres’ own Harmony House label and Xterminator would blur a little sometimes but that’s what happens with family. It’s little wonder that Morgan Heritage and their younger siblings LMS felt at home recording for Fatis, or that Bubble In The Struggle was such a big hit in 1998, which is when Luciano’s Ulterior Motive broke out in the dancehalls. The Messenger had voiced two highly acclaimed albums for Island Jamaica by then, both produced by Fatis, but Ulterior Motive would be one of Luciano’s last hits for the label. When he departed, that left Sizzla as Fatis’ leading act. The fiery young singjay, who’d burst onto the scene with True God and Praise Ye Jah, recorded Taking Over amidst hopes and fears to do with the onrushing new Millennium - an event he believed would enable humanity to hit the restart button. It didn’t quite work out like that yet no one can accuse Sizzla, Fatis and other leading Xterminator artists heard here of failing to heed the zeitgeist. It’s to their eternal credit that the music they made over twenty years ago can still play in today’s reggae dancehalls, and that the lyrical messages continue to be of relevance. That’s the strength and beauty of these recordings, which Global Beats have now lovingly restored and represented anew.