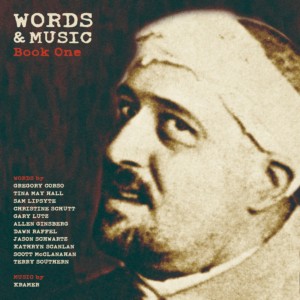 Spoken word recordings from Gregory Corso, Tina May Hall, Sam Lipsyte, Christine Schutt, Gary Lutz, Allen Ginsberg, Dawn Raffel, Jason Schwartz, Kathryn Scanlan, Scott McClanahan, & Terry Southern. About 40 years ago, in a record shop on Long Island during a weekend visit there to see my parents, i found a double-LP that looked like something i should definitely buy. It was called "BIG EGO", by the The DIAL-a-POEM POETS. On the cover was a picture of John Giorno (a great poet Ed Sanders had turned me on to) on a NYC rooftop with Philip Glass, Meredith Monk, and two kids. It cost $2. I bought it and rushed back to my parents house, where i still had my old turntable in the basement, not far from my Jimi Hendrix and Zappa Crappa posters, and my framed portrait of John Cage.

My copy of Eno's "Discreet Music" was still on the turntable, having been left there years before, when i'd fled Long Island for good. I lifted it from the platter, gently slid it back into its sleeve, like a priceless religious artifact, and put Side A of the Dial-a-Poem LP on. I almost lost my mind while listening to it. The next day i went back to the same record shop looking for more DIAL-A-POEM LP's. i found two. One had a long list of names on the back, some famous, and some i'd never heard of before. I bought both LP's, and an hour later, for the first time in my life, i was exposed to the art of Laurie Anderson, whom i'd never heard of before. This was 1978. Her contribution was a piece called "Time To Go". It changed my life. Or at least, that’s how I remember it. I was just a kid, so there were a lot of moments like that, around then. Nowadays, these moments can be had in seconds, with a click of the cursor. That evening, as i sat alone by my imaginary campfire (ie; that record player in my parents basement), i promised myself that someday, somehow, i would embark upon a WORDS & MUSIC project that might move people the same way i was moved when i first heard Laurie, and Robert Wilson & Christopher Knowles, and Burroughs, and Ginsberg, and Corso, and Anne Waldman, and John Ashbery, and the great Charles Olson, and so many others.

Words, for the very first time, had wielded the same power as music. And it was visceral. Just like music. It ran deep. It was a FEELING. John Giorno died in 2019, but he kept poetry alive like nobody's business. I was lucky enough to have spent some time with him in the early 1980's, when i was briefly a member of The Fugs, and often found myself surrounded by those Ginsberg called, "...the greatest minds of my generation". Ed Sanders (who'd ushered me into that scene) once told me that when he came to NYC, it was easy to go to a cafe, or to St Marks Church, and hear Burroughs, Corso, Ginsberg, and all the greats, reading their poetry. He said that even if you were just a bum on the street, you could just walk right up to them, and start a conversation.

They were totally accessible, if they were in the right mood at that particular moment. So i was shocked when Sanders told me he didn't approach any of them, not even once, til he'd been going to their readings for nearly ten years. "For almost a decade, I went to every reading, every lecture, every panel discussion. But I never went near them. Never approached them. Not even once", Sanders told me. "For ten years, all I did, was listen." It took me four decades, but ... better late than never. I finally made WORDS & MUSIC, Book One.

1. Army
2. The Extinction Museum
3. Home Land
4. An Unseen Hand Passed Over Their Bodies
5. It Collects In Me

KramerAnd The Wind Blew It All Away