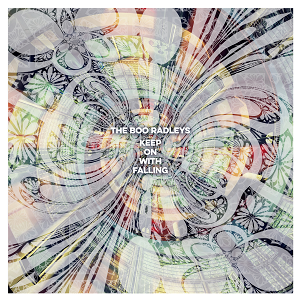 Responding to the warm welcome that greeted news of their reformation earlier this year, The Boo Radleys release their first album of all-new music in 24 years, the 11-track Keep On With Falling on their own Boostr label.

Rising from cult-shoegaze band to the very forefront of British guitar pop inside one, eventful decade, The Boo Radleys began their new chapter in July by surprise releasing the single, A Full Syringe And Memories Of You. Followed by a four-track EP of the same name, memories of the band’s glittering, nineties past remained present in bright melodies crashing into effusive choruses, yet new, altogether less sunny lyrical preoccupations were evident.

Formed of original members, Sice, Tim Brown and Rob Cieka, the 11-songs on Keep On With Falling are the first to be developed by The Boo Radleys as a three-piece. Having recorded six of their seven, previous albums as a ‘hey day’ Creation Records band, working in expensive studios for long periods with cost no issue, the band grabbed the opportunity to test the qualities of modern, DIY recording. Through file sharing and their own, democratic production processes, what emerged was, according to the band, an album where songwriting ideas shone through, free of the static of ego and excess.

Barry says: It's always interesting to hear what massive bands who haven't been around for a while do when they return, and one of my favourite outcomes is exactly this. An LP that shines with optimism and a renewed interest in that which endeared them to so many in the first place. Wonderfully written and full of great melodies, a great return.