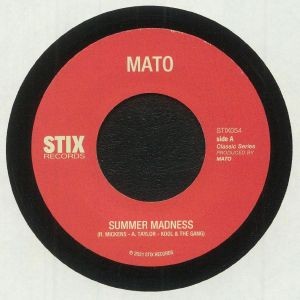 Stix Records, a sub-label of Favorite Recordings, is back with some heavy dub cuts from label regular Mato with its usual special skills as a tailor of reggae music.

On Side A, Mato focuses on the infamous "Summer Madness", originally composed by Kool & The Gang. Providing a fresh dub rework, the song will make you dream of hot wet summer nights, gently rocked by beautiful guitar melodies and sweet Fender Rhodes chords. Just a perfect match for all forthcoming summers of love!

On Side B, Mato takes care of "Use Me", originally composed by Bill Withers on his Still Bill album. Expect funky and bouncy clavinets and a nice melodica line for this rework of a timeless classic. As Mato once said, "Play it loud and burn a chalice!"

Starting his reggae production career in 2006, Thomas Blanchot (aka Mato) has released music through various projects on EDR Records, Big Singles or Makasound ... In the meantime he developed a real trademark, taking over classics French, Hip-Hop, or Pop song, into roots reggae-dub new versions. Besides, since 2010, Mato has built a solid reputation thanks to his hot remixes of Hip-Hop classics on Stix Records.