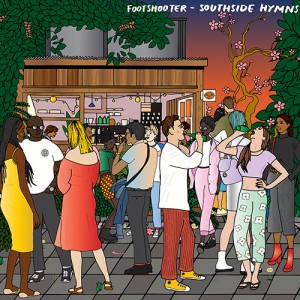 “Southside Hymns” is a decadent tribute to the community, club nights and culture of London that Barney Whittaker (Footshooter) is intrinsically a part of. This ethos is embodied in the skippy, broken-beat of the MA.MOYO-featuring “Passing Clouds” (a tribute to the community-ran venue of the same name), whilst the piercing synth stabs and horn laden grooves of “Juno Café” is a nod to the South East London club space it's named after.

Following the Albertina-featuring single “Twilight”, the EP transitions from a dusk drive through the city - taking in the sights and sounds of Whittaker's favourite foliage-flaunting haunts, to parking the listener firmly on the dancefloor with the trunk rattling bass of “Untether” and the Natty Wylah-featuring “Bloom”.


Through enlisting a guest cast including the likes of vocalists MA.MOYO, Natty Wylah & Albertina, guest instrumentalists and long-term collaborators Wilf Petherbridge, Isobel Risk, Ebyan Rezguli & James Mollison, as well as artwork by illustrator & NTS resident Anu Ambasna - Footshooter has ensured that “Southside Hymns” at once embodies the contemporary London music community that it is also a dedication to.