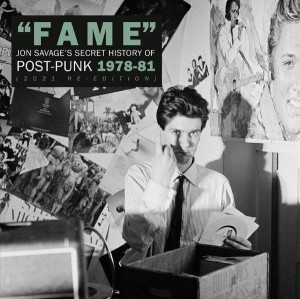 The art of the good compilation album is one that is finely balanced between selecting the familiar and the obscure. Uncovered recordings that may open up exciting new areas ripe for contemplation. When Caroline True Records (CTR) embarked in 2006 in selecting the tracks for the definitive post-punk compilation album with Jon Savage curating, things were certainly never going to be neither humdrum nor boredom-inducing.

For those of you who might not already know him, Jon can best be described as a cultural commentator, writer and longtime music journalist. (The Guardian, the NME, The Face, Melody Maker). He is also the Sex Pistols and Joy Division biographer and writer of the acclaimed “Teenage” and soon-come documentary on the book. Actually, he’s a secret national treasure. At the heart of the London punk scene from the early days, and resident in Manchester during the post-punk era, Savage seems like the perfect person to select gems from his record collection

The spine of the collection features tracks by post-punk luminaries Wire, Joy Division and the Prefects. Not so 'secret' you may think, but consider the nascent and lo-fi Subway Sect, the tough polemic of Noh Mercy and the hyper obscure experimentalism of File Under Pop and you’re getting the idea. Containing 24 tracks in total, "Fame" is the perfect way to either dip a toe in the late 70s / early 80s post-punk underground for the first time, or take a trip down memory lane, with the tracks bringing back half-remembered John Peel plays.