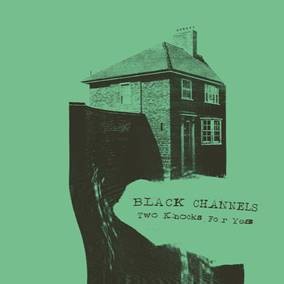 In every story of things that go bump in the night, there are two possibilities. One, that it's a hoax. Two, that there is something going on beyond the grasp of the human mind". And so begins 'Two Knocks for Yes', Black Channels' radiophonic exploration into the poltergeist phenomenon, initially released in 2015 by Castles in Space on a limited edition cassette.

This new remastered vinyl edition presents the same mix of real life stories of paranormal activity with otherworldly vibrations and oscillations conjured up on the Buchla Electric Music Box.

The second of only two releases by the short lived group and a sequel to their brilliant debut single on Death Waltz Originals, “Two Knocks For Yes” continued their preoccupation with other worlds, parallel dimensions and the dark tapestry of the imagination. Chilling accounts of nocturnal visitations and strange activity in the most mundane of suburban surroundings echo in and out of focus alongside electronic manifestations and tape manipulations in this 20 minute experimental radio collage.

Each record comes with a Ghost Spotting Report Form, perfect for recording the spiritual visitations conjured by this new vinyl pressing.

Simon James (Black Channels) will be performing at the Castles in Space Levitation Festival on the 5th November to launch the album.

Barry says: Another exciting round of soundtrack-adjacent genius on the superb CiS here, with Black Channels providing a mix of heady electronic grooves and eerie creeking instrumentals, rich with atmosphere and beautifully packaged as ever. Instant purchase.