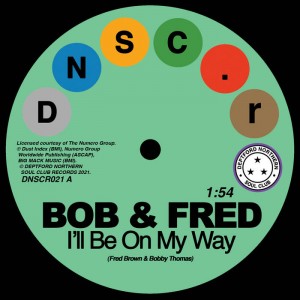 ‘I’ll Be On My Way’ is not only a staggeringly beautiful song, it’s also a super rare side filled with those strings that recall the echoey ceiling of Wigan Casino. A supremely soulful cut with a sturdy beat from 1966, with a classic vocal to fall in love with. Originally on Big Mack and going for over two grand, even the re-issue on Goldmine fetches 75 quid, it’s such an invigorating vocal and storming instrumental.

On side B, The Volumes’ funky floor surfer ‘I’ve Never Been So In Love’. Filled with horn slurps over a crazed organ anchor, it chugs into a singalong chorus that’s impossible to forget. From 1969 and originally on the obscure Garu label, it goes for between £40 and £140 pounds if you're lucky enough to find a copy.

Matt says: Shark-slaying re-issues to keep Kevin Lewandowski crying into his dipping stock value. If you're a fan of Northern on a budget (and sounded nice n crisp to boot!) you need these floor-fillers!