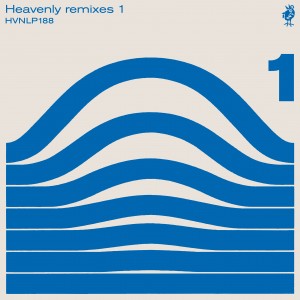 Heavenly was all but founded on the art of the remix; the label’s sadly departed friend Andrew Weatherall remixed the first ever release, and the label has built up an immense catalogue in the intervening years that demonstrates all that is good about the art form and on Friday 10th December 2021 the label release Heavenly Remixes Vol 1 & 2, a brace of albums documenting this long history.

A label forged in the white-hot heat of post-acid house Britain, these Heavenly remixes are perfectly weighted with respect and irreverence, the remixer in each case carefully chosen to add heft to the song - the tracks across the 2 albums are curated, remixed and delivered with love (and a teensy bit of impertinence) and are a glimpse into the catalogue of one the UK’s finest independent labels.

There may well be no rhyme, nor reason, to how these compilations have been put together, beyond the fact that they are assembled with love, an innate understanding of the power of great pop music, and a skilled marriage of song and remixer.

There is no sense of order to Volume 1. You’ll find a smattering of older tracks: album openers Saint Etienne are taken on a Poseidon Adventure with Underworld, who inject ‘Cool Kids of Death’ with typically manic energy. Elsewhere, ’90s Brum duo Mother add dancefloor pzazz to Espiritu’s innate glamour on an all-funked-up reworking of ‘Los Americanos’, and Mark Lusardi’s remix of Moonflowers’ ‘Get Higher’ is an early Heavenly classic.

There are several of Heavenly’s current darlings there too. One of the most exciting young British prospects, Yorkshire’s Working Men’s Club, effectively remix themselves, as Minsky Rock — WMC’s Syd Minsky-Sargeant and producer Ross Orton — cleave ‘X’ into a riotous industrial racket. Jagwar Ma’s Jono Ma takes the Kraftwerkian leitmotif on ‘Automatic’ and drives the Australian jazz-funkers Mildlife down an electro-convulsive psychedelic tunnel (thankfully no-one was harmed during the making of this remix); Sheffield’s DJ Parrot and Jarvis Cocker deliver one of the outstanding remixes of 2018, turning Baxter Dury’s ‘Miami’ into a lovelorn minor opera; and, making its first appearance on vinyl, David Holmes’ Unloved project is taken on a panoramic Welsh waltz thanks to Gwenno.

Barry says: The first volume of the wonderful Heavenly Remixes selection, featuring a number of classics like Baxter Dury's 'Miami' and Mattiel's brilliant 'Guns Of Brixton' getting the rework treatment from some of the dance community's hottest talent.