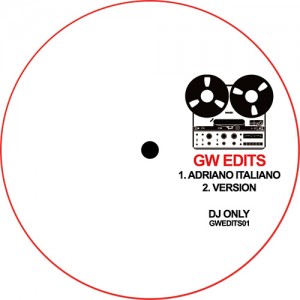 If there was ever a dance oddity it’s the bizarrely named single ‘Prisencólinensináinciúsol’, released in late 1972 by Italian entertainment icon Adriano Celentano, first appearing as a 45 on his own Clan label. A cult favourite if there ever was one, GW Edits kicks off their label with a sumptuous edit sewing the A and B side of the record into an 11-minute masterpiece named ‘Adriano Italiano’.

Renamed ‘The Language Of Love (Prisencol…)’ for the UK market, the original failed to make any impression on the UK chart instead becoming a cult DJ treasure. The fact that it was regularly reissued over the next few years illustrates its enduring appeal.

The novelty of its title and zany nonsensical lyrics may have caught the attention, but what sealed the deal was that groove! On top of that, Celentano’s vocal (as well as that of his wife Claudia Mori, who injected the short female section) that mimics the way English sounded to non-English speakers, comes across nowadays as proto-rap, receiving kudos as such in more recent times. The track is most certainly an anomaly, having no bearing whatsoever on hip-hop culture, yet somehow unconsciously envisaging it.

The flip side of the record was appropriately called ‘Disc Jockey’, also featured that infectious rolling groove complete with offbeat hat. It wasn’t as DJ friendly though, the drums not dropping for the first minute, whilst it also featured a more traditional sounding song in Celentano’s native tongue instead of the rhythmic rap gobbledygook of ‘Prisencólinensináinciúsol’.

Here the two are sewn together for a full-length ‘Adriano Italiano’, running at just over 11 minutes, with the addition of a further two-minute instrumental version. The full-length appears on vinyl for the first time and, along with the original ‘Adriano Italiano’, launches the GW Edits series, bringing this eccentric favourite to a new generation of DJs in time for its 50th anniversary next year.

Matt says: You might recognize this slice of rambunctious cosmic greatness from Fargo, or some of the naughty cover versions out there. But here Greg Wilson goes back to the raw, giving it a couple of cuts and snips, dressing it down for 2021. Every home needs a copy of this record in some form!