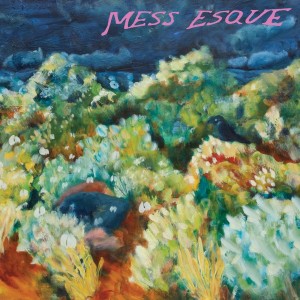 Mess Esque are a duo featuring music and instruments by Mick Turner and words and voice by Helen Franzmann. Their self-titled album is a beguiling travelogue of restless, somnambulant wanderings.

Perhaps best known as one of the Dirty Three, Mick’s been playing guitar and making music with many collaborators for forty years. He’s loved his paintings too but revered especially for his solo music - since 1997, Drag City have released four of his albums, plus an EP and an album of the Tren Brothers (Mick with percussionist and fellow Dirty Three-ite, Jim White) and two EPs featuring Mick as the Marquis de Tren with Bonnie ‘Prince’ Billy.

Mick’s last record was 2013’s ‘Don’t Tell the Driver’, a work that found him departing from his traditional hermetic instrumental template by employing a rhythm section and brass charts and even collaborating with a vocalist. After all the purely instrumental music he’s made with Dirty Three and solo, a singer is now part of the sound he’s hearing in his head these days; while demoing new material, he realized that he was again writing music that needed lyrics - and for that matter, someone other than himself to sing them. But who? In 2019, he was introduced to Helen through a mutual friend who’d produced her last album. Under the name Mckisko, Helen has released three albums over the past 12 years, working and touring with a range of Australian musicians along the way. Her music has been described as numinous and transformative. Her most recent album, ‘Southerly’, saw her moving into a more expansive sound which led to an openness and excitement around further collaboration.

Helen’s words are carefully observed, her phrasing responding intuitively to Mick’s looping guitar figures with vocal repetitions of her own. Starting with a feeling or a voicing, there are often no words - both players are searching on their own paths. Then suddenly they have arrived and are passing the emerging meaning back and forth, the rising intensity forming a kind of undertow that pulls the listener deeper into their world.

Often, Helen would record her vocals in the middle of the night, seeking that 2am flow, a moment of greatest isolation through which to trace her melodie with fragility and strength. This crystallizes Mess Esque’s intention: riding the sleepy drift through the blurred edges of the day… time-traveling to that moment beyond stasis where sense and no sense coincide and share space and time and energy. Viewing from afar the immense peace of this planet when its ghost world of spirits below - the madness of crowds, people sliding past each other faraway in the night - are quieted at last.