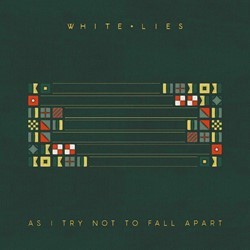 Recorded over two studio sessions, As I Try Not To Fall Apart is White Lies’ most expansive record to date, taking in explosive rock, electro-pop bangers, prog-inspired invention, funk-tinged grooves and some of their most indelible hooks yet.

Working with Mittendorfer, formative versions of swaggering album opener Am I Really Going To Die and the airy rock of the title track were captured, whilst another round of songwriting at Buller’s house ahead of a second recording session really got them firing. “It got us on the same page,” says McVeigh. Soon a coherent album was emerging out of the mist, a record that streamlined everything great about White Lies from across their career: razor-sharp hooks, dark lyrical wit, defiant singalongs, airy soundscapes and dynamic instrumentation.

Throughout they meld their love of pop and prog - opener Am I Really Going To Die features a ruminative lyric on mortality inspired by the 2000 film Ivans Xtc and is one of the funkiest things they’ve ever done, Chic guitars and a lithe bassline building under McVeigh’s quickfire vocals. “Me and Charles are big prog fans,” says McVeigh. The title track, meanwhile, is a euphoric pop gem. “That’s a really important song for us,” says Lawrence-Brown. “I think it will define what the next chapter is. It’s the poppiest thing we’ve ever done.” The rattling stomp of I Don’t Want To Go To Mars was inspired by Elon Musk and the billionaire space race and Blue Drift combines acid-house grooves with widescreen 80s production. There’s a sonic gear change with The End, which sounds like an atmospheric Cure song being sent into space, and There Is No Cure For It – lyrically, a sequel to the opener – ends the record on a soaring, scintillating high.

It’s well over a decade since the band’s breakthrough single Death introduced a group for whom the fragility of human existence has been a constant touchstone. Now in his 30s, chief lyricist Cave’s outlook on the great unknown has evolved. “I think the side of death or mortality that I always find interesting is the fact we all know it’s going to happen,” he says, “and how different people navigate that.”

“We’ll probably never make an album in the way we made this one again,” says Cave. “I think this could be one of our best” says McVeigh. White Lies tested their resolve to get there, but they didn’t fall apart. They have emerged with their most vital collection of songs in years.

Barry says: The music here reminds me a little of Com Truise with it's sleek 80's production, but all lightened with McVeigh's euphoric syrup-smooth vocals and full synthy choruses. With nods to classic prog and funk in there too, it's an unabashedly poppy but wholly satisfying listen.