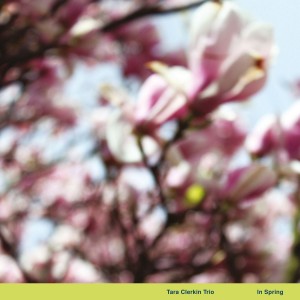 "In Spring" is the second record by Tara Clerkin Trio, a Bristol-based group who appeared to emerge from below the radar of near-all in early 2020 and in the presence of one of the most captivating records of that year. This latest 23 minute, four song collection, recorded in various stages and locations over the last twelve months, does nothing to detract from those first impressions, refining the woozy and shimmering oddness of their debut into an avant-pop sensibility that is increasingly their own.

If the group did arrive fully formed, what that form was did feel supple and hard to grasp. They were, in a sense, essentially new sounding, or at least ghosts between the established lines, and with this new record have doubled-down on their inherently Delphian instinct. At its heart, "In Spring" is a record of subtle contrasts, experimental yet familiar in its intimacy, obviously modern though tied to certain lineages, and driven by a pop logic which is also free-form and seemingly improvised. Their approach to sound is perhaps the guiding principle here, less concerned with genre as it is texture and feeling, drawing from jazz, folk, modern composition, trip hop and downtempo electronica, yet evading all of those categorizations. Tara Clerkin Trio are too generous of heart to be ripping up any rulebook, they simply seem oblivious to its need.

Their geography does provide some context. Bristol's progressive sonic heritage inescapably bleeds into these four tracks, the enclave of open-minded artists around Planet Records in the mid 90s perhaps the closest point of comparison. There's that same magpie spirit which is both futuregazing and aware of its past, though is mostly set on finding its own path. This is in essence what defines Tara Clerkin Trio, feeling their way through freedom of instinct and curiosity, forging their own desire lines. Not so much taking the road less trodden, just walked at their own winding pace.

The AliensBack To Beyond EP