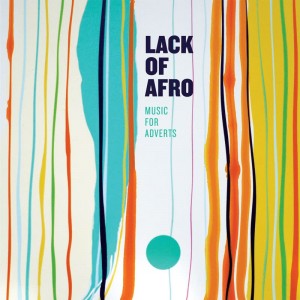 This now classic (and highly sought after) LP from 2014 finally sees a long overdue vinyl repress!

A wide ranging, eclectic and progressive musical outlook has always been the Lack of Afro approach. His latest material followed suit as he harnessed disparate musical styles ranging from funk, soul and hip-hop to create a contemporary yet vintage musical escapade of superb songs.

On his 4th studio album for Freestyle Records, the influences, sounds and musical textures are more eclectic than ever. Below, Adam talks us through some of the his favourite moments on 'Music For Adverts'.

First out of the box is the steaming funk killer Freedom: This time around I knew I didn't want an intro or a skit to start the album - I needed a strong, heavy opener - I had the melody for the chorus floating around in my head. It was then just a case of working with Jack Tyson - Charles on the rest of it and getting the vibe that the song required.

Long time Lack Of Afro collaborator Herbal T features on Brown Sugar: I had an idea of doing a disco track with an emcee on it, which you don't really hear often. This is actually the first time I've sung on a Lack of Afro track, adding my backing vocal warblings on the choruses! Special shout to George Cooper for the howlin' Hammond solo at the end too.

Of the gritty instrumental No Guts, No Glory Adam explains: I wanted to include 3 instrumentals as I always have a soft spot for them & it's what people know me for. The 'choir' was recorded by layering up my own voice in different octaves, nothing is auto-tuned, its all real. The studio allows me to do stuff like that but I could never sing live - I'll leave that to the proper vocalists.

'Proper vocalist' Jack Tyson - Charles again features on The Gypsy, which as Adam explains uses the classic song format to great effect: One of my favourite LOA tunes to date, Its in keeping with the album mission statement of wanting to write 'proper songs' instead of just grooves.

Another supremely radio friendly & catchy composition is the track which introduces Juliette Ashby; Making It Right, of which Adam informs us; the initial idea came from my good friend Flevans. George Cooper & I added the changes, Rory Simmons arranged the strings & Juliette Ashby came up with a really great vocal. It's most definitely different than a lot of LOA material, but that is no bad thing - sometimes you just have to get outside of your comfort zone and try new stuff.

The truth is that Music For Adverts is stuffed with beautiful audio gems of all varieties - from those 'proper songs', though tough nut, hard hip hop jams, deeply grooving funk - Lack Of Afro has mastery of many genres, production & various instruments, which is why this album is a fully formed tour de force through contemporary soul.