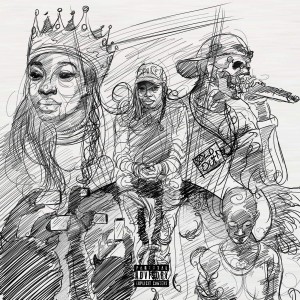 Embarrassingly, we missed this sophomore album from the soon-to-be queen of UK hip-hop. Released in 2015 it captures Simbi Ajikawo's unstoppable ascension to the crown with her now-signature style of powerful, wrecking ball flow, socially conscious & empowering lyrical content and fiery persona in its then-embryonic form.

Now pretty much a household name and likely to be as monumental for British music as Stormzy, Wiley and Nadia Rose, we're all blushing here at HQ about not stocking this first time round! (do feel free to laugh at us online...).

Irrelevant now, as the incredibly poignant and hard-hitting LP is now on our shelves ready for you to get a grip on this unstoppable homegrown talent. Comparisons above aside, her grasp of language, incendiary character, socially-learning verses and soundsystem-testing production remind me, on this outing at least, of some of Roots Manuva's "Run Come Save Me"-era vibe. It'll leave you breathless on completion and reaching for the repeat switch. Don't sleep (like us) a second time folks!