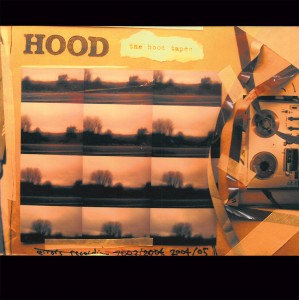 The last widely available Hood album was 2005’s critically acclaimed Outside Closer on Domino Records but the Leeds post-rockers actually released a later collection of songs entitled “The Hood Tapes”. This was presented at the time as a tour-only CD available at their final burst of shows and later part of their highly sought after Recollected box set. Until now the standalone album has been impossible to find even on CD and has never been issued on vinyl. In the sleeve notes to the Recollected set, the band describe the album as ‘something made in a hurry in order to have something to sell on the road’ but “The Hood Tapes” is a lot more than that.

It contains all new music that seems to straddle their career from scratchy experimental New Zealand weirdo lo-fi to the stuttery and staccato r&b influenced pop they sprinkled over that last Outside Closer missive. “The Hood Tapes” could also be seen as a series of sketches of potential future musical avenues open to the band who eventually instead chose to remain silent and although key band members still operate under such names as Bracken, The Declining Winter and A New Line (Related), there has never been any further work issued under the Hood umbrella. “The Hood Tapes” therefore is an overlooked key component to their storied history and this essential release brings it in line with their more well-known work.

A1 The Hurting World
A2 Greydayer
A3 When We'll Wait All The Tables
A4 Driven Out By The Angry Villager
A5 Loss And L.E.D.
A6 Names For Rain

B1 But I Was Only A Bystander
B2 This Year's First Storm
B3 Winter Politics
B4 Sad Neck?
B5 None Of The Above
B6 Leave Like The Ghost You Are.