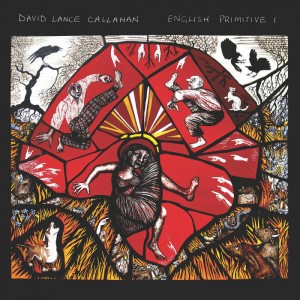 Uniquely of the many acts which came to public awareness through the lauded C86 compilation, David Lance Callahan has pursued a career of consistent brilliance and stark originality. After a run of fine albums with The Wolfhounds, outstanding work with Moonshake and collaborations with members of Stereolab and PJ Harvey (among others), Callahan has outdone himself on this long-awaited solo album, the results of which merit the sort of deep dive best explained with with ample time and a quality turntable. Whether English Primitive I is a product of the past year's isolation or of a long-simmering brew only now ready for dissemination is something Callahan has yet to reveal. Whatever its origins, English Primitive I is the work of a massive talent.

Wolfhoundian riffage offered enough ramshackle charm to somewhat obscure Callahan's darker, more penetrating writing. Likewise, Moonshake's musically bi-polar approach disguised his underlying political impulse. Here Callahan's lyricism finally, indelibly, proves him to be among the finest British pop craftsmen. This is his masterwork, a mélange of what has been called "mutant Eastern, West African, folk, blues and post-punk influences" . . . an improbable cross-cultural gumbo, yet one which coalesced into a swirling, kaleidoscopic psychedelia of emotion unlike any other record in this era. As with any recording favouring the avant-garde –works like Balaklava, Brian Jones Presents The Pipes of Pan at Joujouka, and The Heart Of The Congos– one might expect that the impact of English Primitive I will be revealed slowly, over a much longer span of time than the the too-often workaday product of today's independent music scene. With this album, Callahan takes his place alongside cult heroes Robert Wyatt, Scott Walker and Cathal Coughlan as a prime example of seemingly limitless artistic expression.