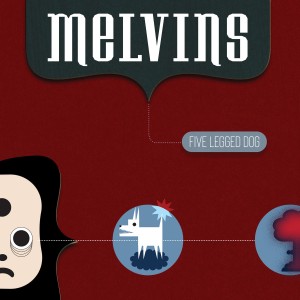 The Melvins’ first ever acoustic collection, featuring 36 songs including classics like ‘Night Goat’, ‘Honey Bucket’ and ‘Billy Fish’, as well as covers of Brainiac, The Rolling Stones and Alice Cooper tracks. This newly recorded acoustic collection features a career-spanning collection of songs, from 1987’s ‘Gluey Porch Treatments’ to 2017’s ‘A Walk With Love & Death’ - the entire gamut of the legendary band’s catalogue is represented.

“I knew I wanted to do something ridiculously big,” explains Buzz Osborne of the band’s first ever acoustic offering. “36 songs reimagined by us acoustically is certainly ridiculous but it works. The magic of the songs is still there regardless of it being acoustic. Since we weren’t touring we had the time to do something of this size. I’m very excited about this record. Dale and Steven did a fantastic job on this. I think it’s a very special record. I can’t think of anyone else who’s done something like this.”

The band previewed the impressive offering with the release of ‘Night Goat’. Dale Crover noted: “I think people will be surprised that we can do an acoustic version of a song like ‘Night Goat’ without losing any of the heaviness. We also worked hard on the vocal arrangements. People are going to freak out!”