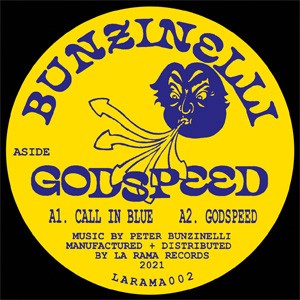 woooahh there playboy, let's slowww things down a little - get a bit lOoSe..

La Rama is one of those labels we go nuts for here at Picc HQ. Understated Canadian dance music made with love, sentiment and shunning and notable trends for something authentic, rock solid, and made to last. The equivalent of a good pair of shoes...

Bunzinelli drops the second essential release on the label here with four tracks which stradle cosmic, EBM and fresh-as-you-like night club trickery in one succinct package. Excited? You should be.

Immediately causing one Jason Boardman to purchase a copy upon hearing about 3 bars, "Call In Blue" is the club weapon you've always wished you had. Built around a beat n bass structure as impenertrable as an army bunker, these narcotic vocal chops are layered overhead in an effort to channel pure shamanic energy into the dance. Serious, if you're not wiggling to this after 30 seconds I doubt there's any circulation to your hips. Breathtaking, incredible, and coming in at under 110BPM to boot!

"Godspeed" follows, a EBM-infused chugger charged with electrostatic and creeping forward with a tectonic force. "Nova" mixes said energy with a baggy flavour, keeping Andrew Weatherall and Baldelli fans equally engaged with with a mid-session roller that'll have the floor in a coital throb.

Finally, Bunzinelli lets loose with a 130BPM techno rocket from inside the bunker. Machine gun snares and more of that highly charged electrical energy coursing through its stems. Sure to blast away all but the most ardent rave goblin come the witching hours of the morning....

Bunzinelli has been personally involved in serving sonic treats to the world via his label and mix series Chambre Noire. He was also part of the team behind Cosmic Tones which in 2019 released "Montreal Pleiades" featuring his first musical outing alongside local major players Priori, Dust-e-1, URA, Temple's M. Salaciak & R. Weng (the wizard behind the first DJ Medallion release on La Rama Records).

Trust me, if your job is to make a mass of people move in unison, you need this tool in your arsenal!

Matt says: Unparalleled club tool that due to its restrained tempo should find favour across a variety of tribes. That A1 track man, "Call In Blue" - literally unmissable if you play in nightclubs.