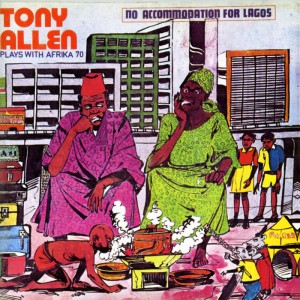 1978 was without a doubt one of the most disturbing years in the history of Fela and the Afrika 70. Just a year before the army had raided Fela's compound destroying his house, his club, his brother's free medical clinic and fatally injuring his mother. With their houses destroyed the band had to squat the former Decca offices. Somewhere in between the madness they managed to record Fela's "Suffering And Schmiling" album and Tony Allen's third solo-project: "No Accomodation For Lagos". Without a doubt his most political orientated record of all. After the record came out Tony Allen dropped from the Afrika 70 band as he felt that too many people were sapping Fela of his creative energies.

A1. No Accomodation
B1. African Message