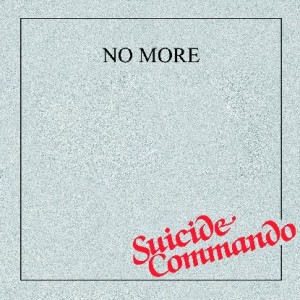 The year is 1981. The Kiel-based PostPunk / Wave underground outfit NO MORE releases their second ever single "Suicide Commando" and their world changes forever. Well, not only their world – THE world. What began as an independently published 7“ single became a cult classic, a genre defining – and defying – song, an all-time dancefloor favorite of many, a timeless signature piece that escaped its original realm of PostPunk x Wave x Indie x Alternative to also become engrained in the DNA of modern electronic dancefloor culture most prominently in the beloved late 90s permutation presented by DJ Hell which became a classic in its own right.

Now the year is 2021. Four decades have passed and NO MORE’s Suicide Commando is back once again - well… the song actually never left! -, this time harking back to the very beginning, the original vibe and the original format. Remastered and re-released with the original tracklisting and paying homage to the original artwork. Available in 7“ format for the first time since 1981. And staying true to the underground blueprint this 40th anniversary re-release edition once again is put out on the circuit through a small independent label: the Intrauterin Recordings offspring El Caballo Semental.

Initial pressing will be limited to 400 copies.

A1. Suicide Commando
B1. In A White Room