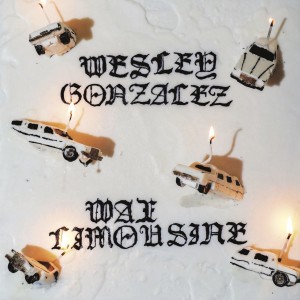 ‘Wax Limousine’ is the third solo album from London’s Wesley Gonzalez. Set for release on 18th March via Moshi Moshi Records, the record is the follow up to last year’s critically acclaimed ‘Appalling Human’ and finds the indie stalwart delivering his most personal album to date, via a collection of 12 irresistible pop songs. The announcement arrives alongside the title track, which received its first play from Marc Riley on 6Music and its accompanying video, the second to be revealed from the record following ‘Greater Expectations’, released earlier this year. In support of the release, Gonzalez heads out on tour this November, headlining Electrowerkz on 25th and supporting Young Knives across the country.

With its truly eclectic range of musical influences drawing on Gonzalez’s ever developing sonic palette, the album’s uplifting sound juxtaposes its themes, documenting the end of a long-term relationship and the overwhelming experience of dealing with a family member’s cancer diagnosis and subsequent treatment. ‘Wax Limousine’ navigates these hurdles with a razor-sharp wit and often brutally perceptive self-awareness, nowhere more so than on the new single. Inspired by both 'Faithless' by Scritti Politti and Aretha Franklin, it is Gonzalez’s version of an 80’s gospel song and, as he explains, written at a crucial point over the last 12 months

“This was written right after the breakup and cancer diagnosis. It was that early stage of a breakup where you can't really understand what went wrong for you or for your ex. There was resentment for the extreme change I had suddenly found myself in, and I was asking what it really was I did wrong. The title Wax Limousine came from old phrases like "as useless as an ashtray on a motorbike". I was trying to express how useless I felt within every situation that had just arrived at my doorstep.”

Wesley Gonzalez first made a name for himself as the leader of Let's Wrestle, whose tuneful and eccentric punk earned critical accolades and a devoted audience with three albums, including 2011’s Steve Albini produced ‘Nursing Home’. Gonzalez wasted little time forging his own path and quickly assembled a live band for his solo work, expanding upon the guitar-driven music of his former band, with an interesting concoction of classic 70’s pop, soul, and indie rock. Gonzalez released his debut solo record ‘Excellent Musician’ in 2017, then the follow up ‘Appalling Human’ in June 2020 through Moshi Moshi Records.