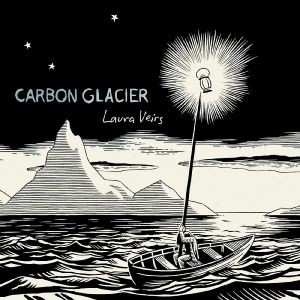 Limited Black and Clear Vinyl release of Laura Veirs’ “Carbon Glacier”. Originally released on CD in 2004, later released on vinyl in 2007 and out of print since 2010 and widely seen as a groundbreaking album in the Laura Veirs canon. “With her landmark fourth album, Veirs evoked the Pacific Northwest in climactic imagery” - Uncut. “Carbon Glacier is a cold, beautiful and engaging record that translates the bleak, isolated vastness of nature into the bleak, isolated vastness of the modern city-sprawl, leaving one voice to sing in solitude.” - Pitchfork. “This is an oddly beautiful album - far more engaging than you’d expect of one written in a grey Seattle winter, pondering mortality, Moby Dick and the great sheet of blackened ice after which it’s named.” - The Guardian Producer/drummer Tucker Martine (Modest Mouse). Martine allows the experimentation to bloom in all the right places, resulting in a record that never overworks itself, despite being packed to the gills with ghostly glockenspiels, organs, random percussion, and trombone.

A1. Ether Sings
A2. Icebound Stream
A3. Rapture
A4. Lonely Angel Dust
A5. The Cloud Room
A6. Wind Is Blowing Stars
A7. Shadow Blues
B1. Anne Bonny Rag
B2. Snow Camping
B3. Chimney Sweeping Man
B4. Salvage A Smile
B5. Blackened Anchor
B6. Riptide