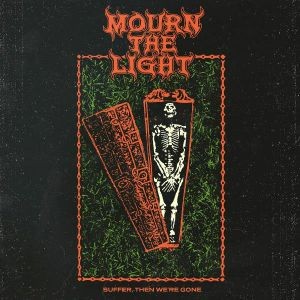 Mourn The Light were formed in early 2018 by Dwayne Eldredge, also co-founder of The New England Stoner And Doom Festival. Driven by his passion for thunderous, traditional doom metal mixed with lofty progressive and power metal leanings, Dwayne was hell-bent on creating a band that could sonically push a message of hope in spite of despair. Following their highly acclaimed 2019-debut EP, ‘Weight Of The World’, and touring the US and Canada on the back of this, Mourn The Light returned to the studio to record their first album. Entitled ‘Suffer, Then We’re Gone’, the band’s debut album showcases a plethora of influences. At one moment, Mourn The Light deliver crushingly massive riffs, only to jump at the next turn, galloping along with shades of classic heavy, progressive and power metal taking hold and leading the way, all the while focusing on incredibly memorable songs with catchy hooks and anthemic choruses.